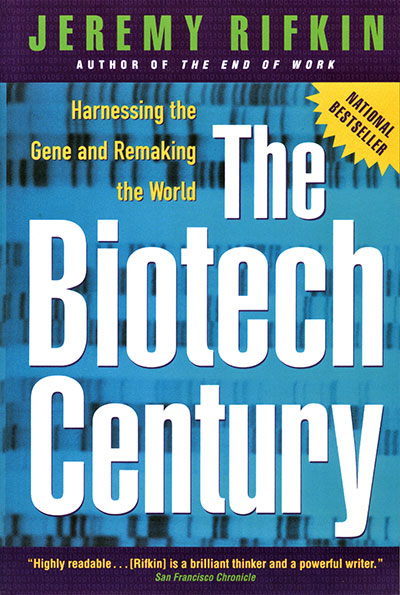 In this provocative and far-reaching book, Jeremy Rifkin argues that the computer revolution is merely a prelude to a far more significant change taking place in the global economy. We are in the midst of a great historic transition into the Age of Biotechnology.

Rifkin notes that after more than forty years of running on parallel tracks, the information and life sciences are fusing into a single powerful technological and economic force that is laying the foundation for the Biotech Century. The computer is increasingly being used to decipher, manage, and organize the vast genetic information that is the raw resource of the new global economy. Already, transnational corporations are creating giant life-sciences complexes from which to fashion a bio-industrial world.

Our way of life, says Rifkin, is likely to be transformed more fundamentally in the next few decades than in the previous thousand years. Food and fiber may be grown indoors in giant bacteria baths, partially eliminating the farmer and the soil for the first time in history. Animal and human cloning could be commonplace, with "replication" increasingly replacing "reproduction". Millions of people could obtain a detailed genetic readout of themselves, allowing them to gaze into their own biological futures and predict and plan their lives in ways never before possible. Parents may choose to have their children gestated in artificial wombs outside the human body. Genetic changes could be made in human fetuses to correct deadly diseases and disorders and enhance mood, behavior, intelligence, and physical traits.

The Biotech Century promises a cornucopia of genetically engineered plants and animals to feed a hungry world; genetically derived sources of energy and fiber to propel commerce and build a "renewable" society; wonder drugs and genetic therapies to produce healthier babies, eliminate human suffering, and extend the human life span. But with every step we take into this brave new world, the nagging question will haunt us: "At what cost?"

The new genetic commerce raises more troubling questions than any other economic revolution in history. Will the artificial creation of cloned, chimeric, and transgenic animals mean the end of nature and the substitution of a "bio-industrial" world? Will the mass release of thousands of genetically engineered life forms into the environment cause catastrophic genetic pollution and irreversible damage to the biosphere? What are the consequences-for both the global economy and society-of reducing the world's gene pool to patented intellectual property controlled exclusively by a handful of life-science corporations? What will it mean to live in a world where babies are genetically engineered and customized in the womb, and where people are increasingly identified, stereotyped, and discriminated against on the basis of their genotype? What are the risks we take in attempting to design more "perfect" human beings? Rifkin explores these and many other critical issues in this ground-breaking book about the coming era.

The biotech revolution will force each of us to put a mirror to our most deeply held values, making us ponder the ultimate question of the purpose and meaning of existence. This, Rifkin maintains, may turn out to be its most important contribution.

As usual, Rifkin asks important, provocative questions.... He covers many serious issues that biotech raises and that the industry typically ducks."

"Very readable and thought-provoking... The Biotech Century is an attempt to prod society into formulating an ethical response to biotechnology -- a means of interpreting and controlling the scientific endeavors of the next century."

"Rifkin does his best work in drawing attention to the gnawing inventory of real and potential dangers and the ethical conundrums raised by genetic technologies.... At a time when scientific institutions are struggling with the public understanding of science, there is much they can learn from Rifkin's success as a public communicator of scientific and technological trends."

"The Biotech Century is Rifkin's latest and most wide-ranging jeremiad against the pace at which genetic engineering and the computer revolution will, in his view, doom humanity unless more public awareness of this ominous trend increases.... He has filled this book with an astonishing range of research published in scientific journals and in the popular media. He is a brilliant thinker and a powerful writer... a shrewd debater in public and in print."

"It is probably best to make clear straight away that this book is not, or not just, an attack on genetic engineering. Jeremy Rifkin is struck by the change that the whole process and its prospects represent in our attitude to nature -- and consequently in the way we conceive of ourselves... this is a shrewd, helpful, and far-sighted book."

"Jeremy Rifkin is a seer, a lucid and well-informed writer devoted to helping us become aware of the titanic impact of technology and the corporate imperative, a cognizance that has never been more urgent."

"In history, revolutions have often turned out to be far from beneficial to those on whose behalf they were claimed to have been initiated. The last thirty years or so have witnessed a biological revolution of incredible dimensions, of which many people have remained unaware. Whereas for many centuries the task of science was seen as helping us understand the ways of nature, in recent years the sciences, particularly the life sciences, have become extremely manipulative: they try to outwit and outrun nature wherever they can.

"Processes that normally might have required hundreds of thousands of years are now performed overnight. The genetic and developmental apparatuses of life are being manipulated, and new living beings with altered properties are being produced.

"Humankind has indeed been give a fateful present. Now, Jeremy Rifkin has written a most remarkable book on the coming Biotech Century, full of information that, as far as I know, has for the first time been collected in such completeness. It deserves to be read by everybody, be he or she optimist or pessimist."

— Erwin Chargaff, Professor Emeritus of biochemistry, Columbia University, and discoverer of "Chargaff's Rules", which laid the scientific foundation for the discovery of the DNA double helix