The Green Lifestyle Handbook: 1001 Ways You Can Heal the Earth (Editor) 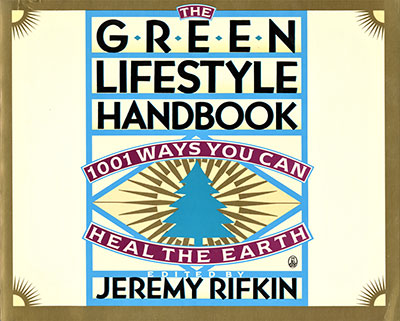 The Green Lifestyle Handbook: 1001 Ways You Can Heal the Earth
edited by Jeremy Rifkin
published in 1990 by Owl Books

Twenty-three environmental experts have placed the survival of the earth in your hands.

Authoritative, wide-ranging, and comprehensive, The Green Lifestyle Handbook suggests hundreds of steps that all of us can take in our personal lives to develop a green lifestyle at home, in our diet, at the marketplace, in the office, on the road, in our communities, at our places of worship, and in our leisure pursuits. It offers an alternative way of living and acting that will help create a sustainable future for ourselves and the planet.

THE EMPATHIC CIVILIZATION
"Many in the scholarly, religious, and political field praise Jeremy Rifkin for a willingness to think big, raise controversial questions, and serve as a social and ethical prophet." — The New York Times