The North Will Rise Again: Pensions, Politics and Power in the 1980s 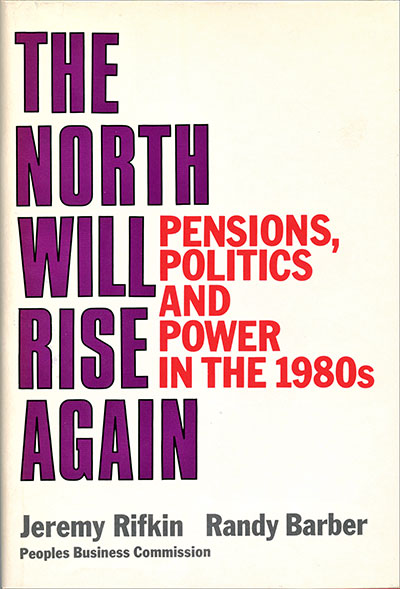 The North Will Rise Again: Pensions, Politics and Power in the 1980s
by Jeremy Rifkin (with Randy Barber)
published in 1978 by Beacon Press

This is an eye-opening look at economic power in America today and the political struggle among the major power blocs — the unions, the corporate/financial community, the northern industrial states, and the sunbelt — to control it. Jeremy Rifkin and Randy Barber provide a completely new approach to solving the growing economic crisis in America and answer the questions millions of Americans, particularly workers in the depressed Northeast, are asking about it. They argue that the economic decline of the industrial North and of organized labor are intertwined, the crux of the problem being the massive migration of capital from North to South and abroad. A substantial part of this capital comes from some $400 billion of employee pension funds: the very money designed to protect the economic security of the workers is being used to destroy it.

The authors have documented an array of astounding facts about the way the American economy operates and have developed a strategy for revitalizing the labor movement as well as the industrial North.

"[The North Will Rise Again] is a brilliant account of the latest stage in the battle between a runaway corporate capitalism and an impoverished American democracy. It accomplishes in a single stroke an analysis relating the economic decay of the Northeast and Midwest, the financial ruin of cities, the height of capital and the failure of public policy to combat inflation and unemployment. The struggle to control capital is the key issue in the coming decades, and Rifkin and Barber map out an impressive strategy for reclaiming capital for capital-starved regions and cities by means of democratic control of pension funds. While the congress continues to apply bandages to a bruised economy, The North Will Rise Again points the way to enduring economic solutions."

"Anyone concerned with the chronic economic crisis in the U.S. and how to get out of it must read this book."

"This seems to me a very important book. It is one of those very few books that may have a real impact in changing the thinking of men of action in politics, government and organized labor, as well as stirring up intellectual excitement in academic circles."

"[The North Will Rise Again] has drawn the battle lines for what is likely to become a major political issue in the coming decade-who shall control the investment of pension funds and therefore determine the future of the U.S. economy?.. The book has the potential of becoming the "Unsafe at Any Speed" of the pension industry. . . . It is easily the most definitive-and provocative-work to date on the control of pension investment."

"During my 25 years in Washington, I have seen many fine examples of 'muckraking,' exposing a wide range of corruption, misuse of power, and perversion of our democratic institutions. The North Will Rise Again surely deserves to be listed with the very best of these books."

". . . challenges the conventional wisdom and parochial views of far too many labor leaders. I recommend it highly . . . ."

"Rifkin and Barber are careful, serious and gifted scholar activists who have written an important and lasting book."

"For anyone concerned about making social change, this is necessary reading-the numbers are invaluable, and the perspective will hopefully spark a new debate on the nature of American radicalism, and the strategies it must follow for the rest of the century."