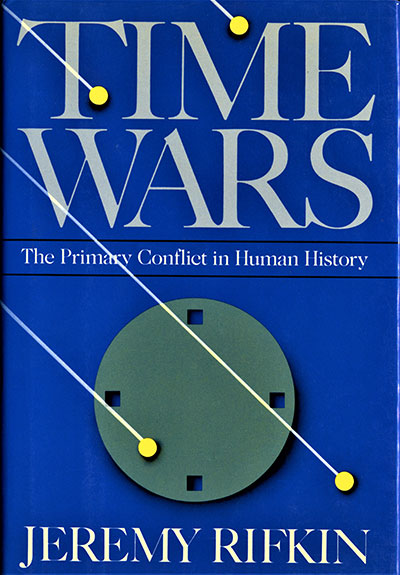 Time Wars: The Primary Conflict in Human History
by Jeremy Rifkin
published in 1987 by Henry Holt and Company

Time Wars: Not since Rachel Carson's Silent Spring has one book tackled a subject of such importance.

A battle is now brewing over our present conception of time. Its outcome will help determine the future of our society in the coming century. On one side are the power-time advocates, who would have us enter a hyperefficient computerized world where time is taken beyond human conception and recorded in nanoseconds (billionths of a second)-an artificial time world where past, present, and future blur together to create a simulated paradise divorced from the organic and seasonal time orientation of the planet. On the other side stand the time rebels, who question society's capitulation to the nanosecond time frame. They argue instead for an ecological time orientation that would resynchronize our social and economic activities to the biological and physical rhythms of the natural world.

Just as the "small is beautiful" idea challenged the myth that "bigger is better," the new ecological time vision, "slow is humane," challenges the prevailing view that increased speed and efficiency automatically mean progress.

The distinguishing feature of any society is its use of time, posits the author. Even before the Middle Ages when bells of the Benedictines first ordered the lives of monks, to the clocks and schedules, computers and programs of today, individuals have been organized into time-regulated groups as a requirement for social and economic security.

Jeremy Rifkin provides a context for the emerging "time wars" by arguing that the great political battles in history have been waged over competing temporal visions. The author surveys Western culture and concludes that changes in civilization take place only with corresponding changes in our conception of time. In the process Rifkin offers persuasive evidence to demonstrate what happens to our species when time is snatched from its biological and environmental moorings.

Time Wars is for everyone who wonders why, in a culture that is so intent on saving time, we find so little time left for ourselves and for each other.

"Intriguing information . . . Rifkin offers escape hatches for those who do not wish to become microchips in the world computer bank."

"Time Wars is a book you will read in a few hours but will reflect on for a lifetime . . . Jeremy Rifkin gets you thinking, as you never have before, about the consequences of different time concepts that prevail between cultures and between generations."

"A groundbreaking, insightful preview of the emerging politics of efficiency."

— Hazel Henderson, author of Politics of the Solar Age

"Provocative and timely . . . In Time Wars Rifkin argues persuasively that speed and efficiency are neither the only nor the best value upon which civilization can advance."

"Marshaling evidence from many sources across the broad spectrum of our computerized, time-compact civilization, social commentator Jeremy Rifkin senses a revolutionary change in human time-consciousness. With passionate conviction he argues that by organizing our lives around schedules of increasing precision . . . we lose the freedom of imprecision-obvious, but someone had to say so. By concentrating on immediate gains we lose the human privilege of seeing the world in terms of history-and benefiting from it. By depending more and more on rhythms and tempos that were created in support of industrial civilization, we force ourselves into temporal molds other than those created by organic evolution. The result is a social jet lag whose long-term effects go unexamined . . . Time Wars is a challenge to social scientists, psychologists, biologists and humanists to examine critically and help create a public attitude toward time that supports rather than works against human dignity."

— J.T. Fraser, Founder, International Society for the Study of Time