Who Should Play God? The Artificial Creation of Life and What it Means for the Future of the Human Race 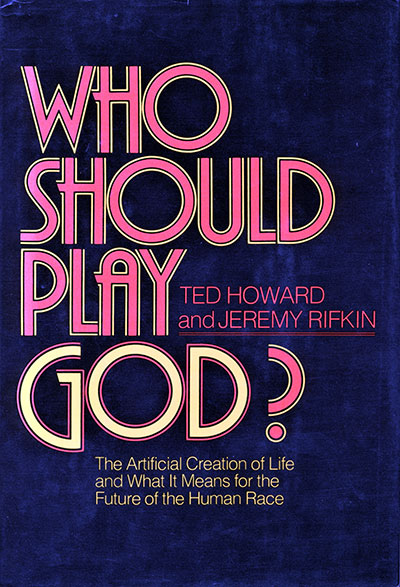 Who Should Play God? The Artificial Creation of Life and What it Means for the Future of the Human Race
by Jeremy Rifkin (with Ted Howard)
published in 1977 by Delacourte Press

In 1953 two young biologists succeeded in cracking the DNA code, unlocking the secrets of the basic genetic structures of all life. Now, only twenty-five years later, scientists possess the awesome power to upset billions of years of natural evolution. With the discovery in 1973 of recombinant DNA-a laboratory technique for splicing together genetic material from unrelated organisms to manufacture new and unprecedented life forms -genetic engineers can create monstrosities beyond imagination. In a few years, they will be able to propagate a super-race of beings as easily as they will be able to create a docile, subhuman breed of servants and slaves. Scientists claim that in ten years they will be able to clone an unlimited number of exact replicas of any living organism from a single cell of its body. Their research may already have produced new renegade bacteria and viruses that could destroy all life on this planet.

Who Should Play God? is the first full-fledged report on recombinant DNA research in America-what it is, how it developed, where it may take us, and who is leading the way. A glimpse at any aspect of the issue readily shows how precariously we are perched on the genetic powder keg: Leading genetic engineers are proposing that only people with superior genotypes be licensed to have babies. Corporations engaged in present recombinant DNA research have the right to own and sell all new life forms that they create in their laboratories. Experimenters are exploring the possibility of increasing brain size to produce a new super-species of human beings. If this unbridled research and experimentation continues, the question of the future of life on this planet becomes painfully simple: Who will be chosen for life in the post-evolutionary world? And who will do the choosing?

"Probably not since the invention of nuclear weapons has a scientific advance been received with such mixed feelings."

"Who Should Play God? contains a massive amount of data on one of the most important issues to face society and should be read by everyone interested in life on our planet."

"This book is must reading for those who want to understand the roots of the present controversy."