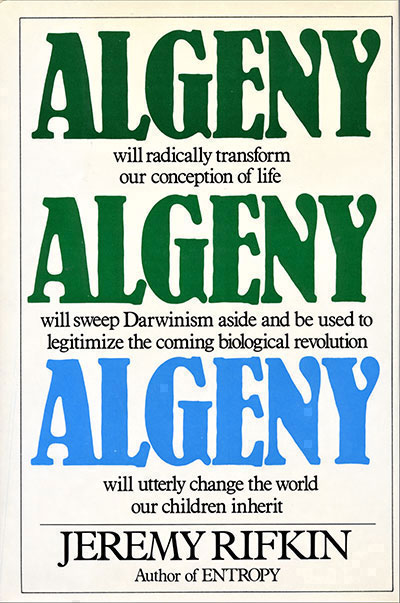 Algeny is a challenging and controversial reevaluation of Darwinism, a critique of the coming era of bioengineering, and a critical examination of the way we view our relationship with nature. Jeremy Rifkin, author of the best-selling Entropy, reasons that our decision to develop biotechnology is potentially far more dangerous than our decision to split the atom. Beyond the promise of miracles may lie the reality of extinction.

For the first time in history, humanity is able to convert living material into new shapes and forms, to redesign existing organisms, and to engineer wholly new ones genetically. It is a time that marks a qualitative break from our entire past relationship with nature. Our children will grow up in a world populated with their own artificial creations, and thus their conception of the very meaning of life and existence will differ fundamentally from that of every other generation preceding them in history.

What are the far-reaching implications of humanity’s new-found ability to create life? Every society invents a concept of nature that justifies its technology and social order, thus claiming to have the natural order on its side. Inexorably, then, we are shedding the Darwinian concept of nature, which has legitimized industrial society for five generations, for a new concept that will legitimize the emerging biotechnical society — a concept with cybernetics as the organizing framework, computers as the organizing mechanism, and living tissue as the organizing material.

Will this new concept of nature be any closer to the truth than Darwin’s and the countless other explanations of nature that humanity has entertained over the millennia? Rifkin says no, and offers a revolutionary new critique of the history of Western thought to support his contention.

From its succinct depiction of a world in the act of reconceiving itself, to its truly challenging thoughts on the moral implications of our new cosmos, Algeny is a pioneering chart for the navigation of the future’s awesome seas.

“This book may well be one of the most important documents of the decade.”
— Senator Mark Hatfield

“Rifkin brilliantly presents a revelation about a process as dangerous as the nuclear arms race . . . As citizens of conscience, we have a moral responsibility to fully understand what could become a social issue that will affect the whole of humankind.”
— Congressman Ronald V. Dellums

“A book that exhilarates with its intelligence . . . Rifkin wrestles with the light and dark of our drive to subdue nature.”
— Vogue

“Jeremy Rifkin always manages to get on the leading edge of an emerging issue-or even out beyond the leading edge. Algeny is his most far-ahead book to date. And it serves as an especially good ready warning system for the public about what is soon going to be an important social issue.”
— Robert Rodale, President, Rodale Press

“Rifkin asserts at length that Darwinism is a moth-eaten theory that should be discarded once and for all . . . He is not polite or hesitant. He does not pull his punches. But why should he? He is correct, and he is doing a public service by revealing the naked truth.”
— Norman Macbeth, author of Darwin Retried

“He has produced another well reasoned book . . . As we face a new possibility of genetic manipulation of the human species we must be prepared for the philosophical consequences. This book is important because it treats the very real question of how we are to face the age of biotechnology.”
— Ghillean T. Prance, Senior Vice-President for Science The New York Botanical Garden

“A truly daring interpretation of the emerging human situation that uncovers the deepest roots of historical destiny. Rifkin, in essence, challenges each of us to defend what is precious about life by resisting the future being prepared at the frontier of science-biogenetic engineering. Properly read, Algeny develops a powerful case for the renewal of our civilization at every level.”
— Richard Falk, Professor of International Law, Princeton University

“Jeremy Rifkin has given us a framework for critical consideration of future technological advances. Algeny is an insightful critique of the changing way in which mankind views nature . . . This important book raises the questions that must be addressed as we achieve an ever-greater ability to control nature and as we move rapidly toward the ultimate technology: human genetic engineering.”
— Congressman Albert Gore, Jr., Chairman, Congressional Clearinghouse on the Future

“Jeremy Rifkin is always provocative and creative. His Algeny is no exception. It approaches fundamental reality in new and profoundly helpful ways. This is a brilliant, suggestive, and informed contribution to our common thought.”
— Bishop A. James Armstrong, President, National Council of Churches

“Jeremy Rifkin challenges us to confront the normative and social consequences of bioengineering. It is imperative that we face the questions that Rifkin’s portrait of the future presents.”
— Everett Mendelsohn, Professor of the History of Science, Harvard University

“Every now and then a book comes along-like Marshall McLuhan’s Understanding Media, or Thomas Kuhn’s Structure of Scientific Revolutions-that awakens society to the impact of science and technology on the way we perceive the world and the way we live our lives. Jeremy Rifkin’s new book, Algeny, is such a book. Algeny is a real eye opener, focusing on the greatest technological revolution since the discovery of fire — the Age of Biotechnology . . . This is one step into the future we must make with our eyes and hearts open . . . After reading Algeny, you will never be the same.”
— Rick Ingrasci, M.D., President, Association for Humanistic Psychology