Beyond Beef: The Rise and Fall of the Cattle Culture 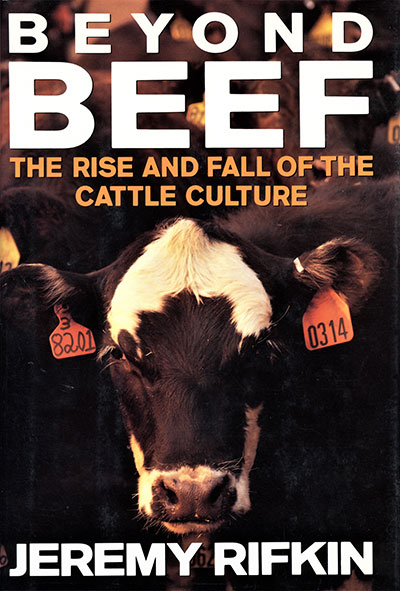 Beyond Beef: The Rise and Fall of the Cattle Culture by Jeremy Rifkin Dutton Books 1992

“There are currently 1.28 billion cattle populating the earth. They take up nearly 24 percent of the land mass of the planet and consume enough grain to feed hundreds of millions of people. Their combined weight exceeds that of the human population on earth.”

Beginning with this startling and unsettling set of facts, Jeremy Rifkin interweaves anthropology, history, sociology, economics, and ecology in a brilliant and devastating examination and indictment of the cattle culture that has come to shape and warp our world.

The fascinating story he tells goes back to the beginning of civilization, when the belief in the mystical power of cattle and magical properties of beef first was born. He charts the age-old conflict between those who raised cattle and those who farmed the land-a conflict that drastically affected the course of Western history and culture. Rifkin cuts through the myth of the cowboy to illumine the international intrigue, political give-aways, and sheer avarice that transformed the great American frontier into a huge cattle breeding ground. Then, taking us from the sprawling Chicago stockyards to the automated factory feedlots of the Iowa plains, he presents the most disturbing indictment of the beef industry since Upton Sinclair shocked the American public with The Jungle eighty-five years ago. Finally, he gives us a superb overview of the triumph of the beef mystique in America and the world-a triumph marked by the golden arches of McDonald’s in cities as distant from each other as New York, Tokyo, and Moscow.

Above all, Beyond Beef adds up the cost of all this. It depicts a world in which the poorer peoples of the planet have been starved to support the beef addiction of a handful of wealthy nations. In Europe, the United States, and Japan, this addiction has resulted in millions of deaths from heart attack, cancer, and diabetes-the diseases of affluence. The book also describes the grim ecological effects of the cattle culture: rain forests burned, fertile plains turned into desert, and climate threatened by global warming.

Beyond Beef may well take away your appetite for beef, but it will stir your hunger for change-before it is too late. This persuasive and passionate book is for the 1990s what Silent Spring was for an earlier decade-an urgent warning to everyone who cares about the fate of the earth.

“Powerful . . . a wake-up call to the world. . . an important and painstakingly documented work.”
— Boston Sunday Herald

“A searing expose . . . If the perils of cholesterol and the indignant cries of animal rights activists weren’t enough to stave off your last Big Mac attack, this book just might.”
— Village Voice

“You’ll never eat a burger with as much gusto again . . . that is, if you don’t swear off eating meat entirely-after reading this indictment of the meat industry that’s a modern-day nonfiction version of Upton Sinclair’s The Jungle.”
— New York Newsday

“Highly readable . . . Impressive . . . With heartbreaking particularity, Rifkin shows how raising cattle is turning the planet into desert. . . . There is no doubt that he builds a case.”
— L.A. Weekly

“So many powerful arguments . . . Before starting Beyond Beef, take a third of a pound of ground beef, broil it for about four minutes on each side, place it on a bun, and then savor every bite. You’re not going to want another hamburger for a long, long time.”
— Newsweek

“A fascinating look at the insidious mythology that underlies cattle, cowboys, and capitalism. Rifkin critically examines the cattle complex and shows us how it is a principal perpetrator of our global crimes against nature.”
— Jim Mason, co-author of Animal Factories

“This is the most interesting and readable book yet on the fascinating subject of the ancient and complex relationship between humans and cattle. Rifkin’s genius is in his ability to demonstrate convincingly how this relationship has badly damaged not only our natural landscapes but also our human psyches. A must for anyone who cares about what is happening to our earth.”
— Brock Evans, National Audubon Society

“In every generation there is a handful of people whose work contributes to the evolution of consciousness. Jeremy Rifkin is one of the seminal minds of our age. With penetrating insight, wide-ranging scholarship, and deeply human compassion, Jeremy Rifkin helps us to understand the historical, social, and economic forces that have led to our beef addiction, and he shows us the way out. This is an extremely important book, but it is more than that. It is a key to a livable, sustainable, and beautiful future.”
— John Robbins, author of Diet for a New America

“Beyond Beef chronicles a culture-the beef culture-that will have entered the twilight years of its existence by the end of the twentieth century. It is required reading for anyone who cares about animals, the environment, and the well-being of humanity itself.”
— John A. Hoyt, president, the Human Society of the United States

“This is a valuable contribution to the battle to improve both the ecosystem and human health by reducing the dependence of homo sapiens on cattle.”
— Paul Ehrlich, author of Population Bomb