Emerging Order: God in the Age of Scarcity 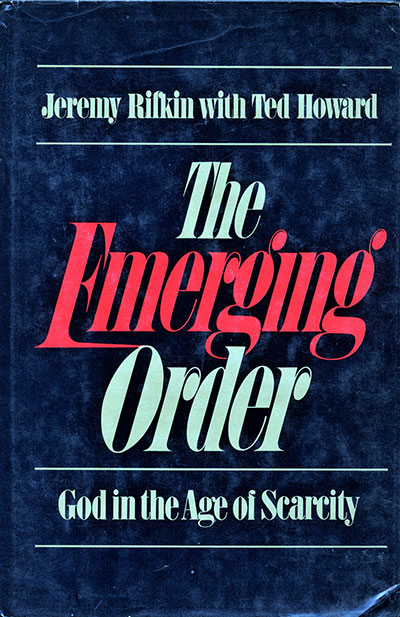 The Emerging Order: God in the Age of Scarcity by Jeremy Rifkin (with Ted Howard) Ballantine Books 1979

America has entered an age of scarcity: The “unlimited wealth” on which the American dream is based is now clearly a delusion, and the coming bad years have plunged the nation into a spiritual void.

In this provocative book, the authors provide a blueprint for American culture that is staggering in its implications. Beyond being yet another indictment of the liberal welfare state, their thesis points to a major cultural reformation in which religion will play a leading role in the rearrangement of our nation’s priorities. Today’s Christian renewal movements — particularly the Charismatics and evangelicals — could end up challenging the assumption behind the state’s economic definition of man, namely, that we are all wholly predictable materialists, driven by a consuming desire to maximize profit and consumption. Such a viewpoint has been used to justify the unrestrained pillage and exploitation of the natural world.

Now, contemporary theologians find the hope for our economic redemption in the redefinition of the concept of “dominion” — God’s first mandate to Adam in Genesis — and the human race is being asked to serve as steward and protector over all God’s creation. This directive is the theological formulation of the “small is beautiful” argument we have heard from other quarters.

Thus the authors have identified the key element in the emerging order: the possibility of a second religious reformation and a radical transformation of our nation’s goals informed by the idea of stewardship. But if this effort fails, the authors warn that America could face the chilling possibility of a new fascism and is destined for wholesale self-destruction.

“I have no hesitance in urging all who seek to understand the limits and the possibilities of both traditional liberalism and traditional conservatism to read and ponder this exciting book. Jeremy Rifkin not only traces the historical relationship between the economic order and spiritual faith; he also gives us the outline of the social order now emerging.”
— Senator George McGovern

“The Emerging Order. . . provides a blueprint for the economic and spiritual challenges facing the Christian community in the remainder of this century. He dramatically illuminates the wayward self-destructive course in modem society’s values and points to the potential saving role that can be played by people of faith. . . . An exciting, fascinating book; it knocked me over.”
— Senator Mark Hatfield

“The Emerging Order promises to be, in my view, one of the most discussed books in the religious world this year. ‘It could become, and I hope will be, a watershed book for the evangelical community.”
— Wes Michaelson, Editor, Sojourners

“This is one of the most stimulating books I have read in recent years. My prediction is that it will be a stimulus for many other books that will be written in the years immediately ahead on the decline of our Western way of life and the possible shape of things to come.”
— T.B. Matson