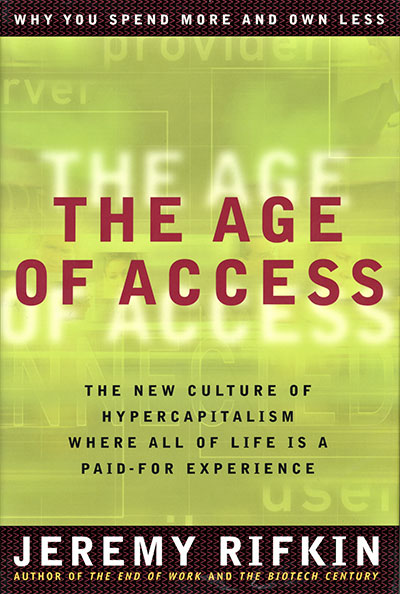 Imagine waking up one day to find that virtually every activity you engage in outside your immediate family has become a “paid for” experience. It’s all part of a fundamental change taking place in the nature of business, contends bestselling author Jeremy Rifkin. On the horizon looms the Age of Access, an era radically different from any we have known.

In the hypercapitalist economy, buying things in markets and owning property become outmoded ideas, while “just-in-time” access to nearly every kind of service, through vast commercial networks operating in cyberspace, becomes the norm. We increasingly pay for the experience of using things-in the form of subscriptions, memberships, leases, and retainers-rather than for the things themselves. Already, millions of Americans have given up ownership of their automobiles in favor of leasing cars as a service and are renting everything from software to furnaces.

Similarly, companies around the world are selling off real estate, shrinking inventories, leasing equipment, outsourcing activities, and becoming “weightless”. Ownership of physical property, once considered a valued asset, is now regarded as a liability in the corporate world.

Rifkin argues that the capitalist journey, which began with the commodification of goods and the ownership of property, is ending with the commodification of human time and experience. In the future, we will purchase enlightenment and play, grooming and grace, and everything in between. “Lifestyle marketing” is the buzz in the commercial world as more and more consumers become members of corporate-sponsored clubs and participate in corporate-sponsored activities and events. People are even living out their lifestyles in planned commercial residential communities. The business of business, therefore, is no longer about exchanging property but, rather, about buying access to one’s very existence in small commercial time segments. In the Age of Access, Rifkin asks, will any time be left for relationships of a noncommercial nature?

The changes taking place are part of even a larger transformation occurring in the nature of capitalism. We are making a long-term shift to a system based on the selling of cultural experiences. Global travel and tourism, theme cities and parks, destination entertainment centers, wellness, music, film, television, the virtual worlds of cyberspace, and even social causes are fast becoming the center of an economy that trades in cultural resources.

The old giants of the industrial age, companies such as General Motors, Sears, USX, Boeing, and Texaco, are giving way to the new giants of cultural capitalism, Viacom, AOL Time Warner, Disney, Sony, and News Corporation. These transnational companies, with communications networks that span the globe, are mining cultural resources in every part of the world and repackaging them in the form of commodities and entertainments. The top one-fifth of the world’s population, says Rifkin, now spends as much income accessing cultural experiences as buying manufactured goods and basic services.

Rifkin warns that when the culture itself is absorbed into the economy, only commercial bonds will be left to hold society together. The critical question posed by The Age of Access is whether civilization can survive when only the commercial sphere remains as the primary arbiter of human life.

“One basic economic rule, as Mr. Rifkin points out, has not changed since Roman times: caveat emptor. In the brave new wired world, it will be ever more difficult for the buyer to beware of technology speeding forward in nanoseconds, controlled by global giants.”
— The New York Times

“Jeremy Rifkin identifies several of the most powerful ‘beneath the surface’ change-forces impacting business, society, and even individual identity — especially those forces unleashed by the power of the Internet and e-commerce. He raises provocative questions about a not-too-distant future when traditional relationships among people, property, and knowledge are radically altered, all ruled by a very different commercial worldview. Worthwhile reading for anyone interested in seeing where we’re all going and what new opportunities may be captured by the nimble.”
— Professor Thomas Gerrity, Director, Wharton e-Commerce Forum

“How do we get a better grip on ourselves, the changing nature of commerce, and the culture we will all inhabit in cyberspace? We start by reading Jeremy Rifkin’s The Age of Access.”
— Norman Lear

“Jeremy Rifkin has the rare ability to look over the horizon and see the future that’s bearing down on us. His vision of corporate capitalism dematerializing into webs of access and networks of ‘virtual’ power is startling and compelling — another warning bell for democracy and human society, as prescient and alarming as Rifkin’s previous books.”
— William Greider, author of One World, Ready or Not: The Manic Logic of Global Capitalism