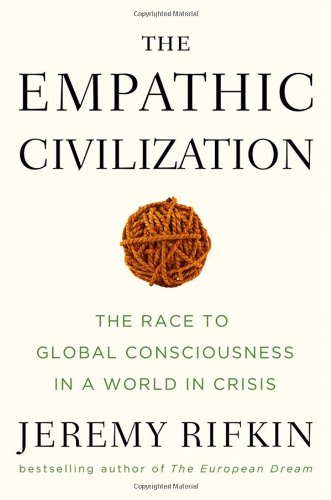 The Empathic Civilization: The Race to Global Consciousness in a World in Crisis by Jeremy Rifkin Tarcher 2009

In his new book, The Empathic Civilization, Jeremy Rifkin contends that we are at a seminal turning point in human history and that the coming decades could well determine our future survival on earth.

While Mr. Rifkin argues that a sustainable, post-carbon Third Industrial Revolution must be quickly adopted in every country if we are to avert a catastrophic change in the climate of the earth, he cautions, nonetheless, that new technologies and business models alone will not be sufficient to address the enormity of the crisis facing the human race. What we need is a change in human consciousness itself.

In his role as an advisor to heads of state and companies around the world, Mr. Rifkin has come to believe that the global discussion must move beyond market incentives and government sanctions, codes and standards. In order to address the triple threat of the economic crisis, energy security, and climate change, we must rethink human nature itself and reconceptualize the meaning of the human journey.