Your Complete Environmental Guide to Making Political Choices in the 90s 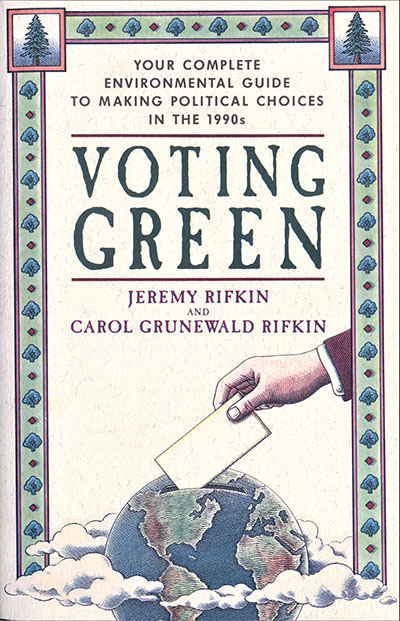 Voting Green: Your Complete Environmental Guide to Making Political Choices in the 90s
by Jeremy Rifkin and Carol Grunewald Rifkin
published in 1992 by Doubleday

The upcoming elections could well determine the fate of the earth in the coming century. This time you can make a real difference when you mark your ballot. Let Voting Green be your guide to making the most informed and meaningful decision.

Voting Green presents a sweeping new political platform touching on a wide range of concerns you care about, including the development of a sustainable economy, global environmental security, clean air and water, healthful food, a safe workplace, animal protection, preserving biodiversity, and the future direction of science and technology, to name a few.

Voting Green gives a complete checklist of Green positions by which to judge political candidates in the upcoming primaries and general election.

Voting Green provides the most detailed and incisive analysis available of the Bush Administration's performance on Green issues.

If you're fed up with traditional politics, now there's an alternative: Vote Green!

THE EMPATHIC CIVILIZATION
"Many in the scholarly, religious, and political field praise Jeremy Rifkin for a willingness to think big, raise controversial questions, and serve as a social and ethical prophet." — The New York Times